What is the Auxiliary Pilgrim MTA?

Each Auxiliary Pilgrim Image is a daughter pilgrim Mother because it is a replica of the original one carried by John Pozzobon. It is directly connected to him, because such an image is blessed and sent out from the Schoenstatt Shrine in Santa Maria, Brazil, the place of origin of the this apostolate. Over thirty years after the foundation of the Schoenstatt Movement, in August 1951, Father Joseph Kentenich, the founder of Schoenstatt gave its blessing to Deacon Pozzzobon and to this apostolate.

These images are destined for either a diocese, a Diocesan Shrine or a larger specific are of apostolate, under the responsibility of a leader or a coordinator of a designated area. The first one was received by Deacon Ubaldo Pimentel in Santa Maria, RS, Brazil, on August 12, 1979). They are identical replicas of the Original Pilgrim Image. They have the same dimensions and shape. According to the interpretation of Deacon João Pozzobon, the Auxiliary Images are a continuation of the blessing of the Founder of Schoenstatt, Fr. Joseph Kentenich, given to the apostolate of the Rosary Campaign in the Original Shrine on August 04, 1951. As an expression of its unity with the Original sources, all “Auxiliaries” are blessed at and leave from Santa Maria’s Schoenstatt Shrine, in Brazil, the place where this apostolate began. 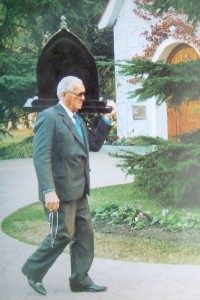 A bit of history

The year 1980 was drawing to a close. Mr. Jironimo Bolsan’s request for a rep¬lica, the size of the original Pilgrim MTA, brought Poz¬zobon much joy. John saw in him a leader of the Campaign in the North. “You shall be a leader, as you always were, of our Mother and Queen,” he writes. “The picture, with a blessing and ceremony, will be sent from the shrine. This means that you are a follower of the great Gospel and Rosary Campaign. You are connected with the most beautiful graces of the shrine and with the entire Campaign. Know that you have the best blessings of our Holy Father the Pope. I congratulate you, and I make vows for success, success so great that it leaves you in a state of wonderment.” This is the second Auxiliary of the Campaign. It shall be sent from the shrine. John suggests that Mr. Bolsan spend a day there so as to receive the Pilgrim MTA in the shrine. Then he can “hear more wonders about the vigorous Campaign.” We see in John, as he senses that his time is running out, a growing concern and longing to find and form new leaders of the Rosary Campaign. “It is my great concern. I am going gradually. Time is running out. I know that I can part, not in spirit, but certainly on the human level. The large organization has its leaders who have heard our Mother call. She has chosen them, and you are among those selected. She places her confidence in persons who do not measure the cost of sacrifice. Thus, let us remain always united in spirit with our good pastors.”

The Campaign’s Auxilaries were the fruit of an inspi¬ration. “When I was inspired to introduce Auxilaries…” are John’s own words. In written reflections titled “Schoenstatt, a Tree Always in Blossom,” Poz¬zobon establishes certain criteria with regard to Auxilaries:

It is a matter of faithful replicas, the same size as the original Pilgrim MTA.

Always connected with the Original Shrine, all Auxiliaries shall part from the Schoenstatt Tabor Shrine in Santa Maria, which is the Rosary Campaign’s place of origin.

These pictures should not stay in the shrine. Rather, they are to go on pilgrimage, for they motivate, they draw people. She, the Mother of God, is present as the mother who walks. Thus, not only we walk, rather she and we walk together.

The Auxiliaries are “an extension of the blessing given by our father and founder, Fr. Joseph Kentenich, from the Original Shrine on August 4, 1951.” A leader is needed to take care of each Pilgrim MTA.

Deacon João Pozzobon took the role of leader quite seriously. In the above-mentioned letter to Jironimo Bolsan he wrote, “The one to be entrusted to you is yours. Should the day come when there is no mission, then the Auxiliary returns to the Shrine.”

With the year 1980 three decades of a vigorous and uninterrupted pilgrimage came to a close. For Pozzobon it was like a be¬ginning. This is how he would express it some years later on September 11, 1984, “When everything seems useless, others shall continue this work of global salvation. Our 30 years are no more than a great beginning. That the fruit may ripen in due season, we cannot run from the cross.” 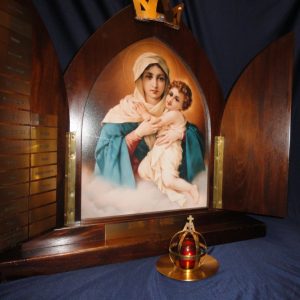 The Auxiliaries should be made available for special events of the Schoenstatt Family in the particular area. They can be made available for parish and diocesan events as well. While it should not be used instead of the Pilgrim images which travel from home to home, it may visit homes in special occasions.

It is advisable to accompany the Auxiliary image with special prayers, explanations about the origin of the Rosary Campaign and if possible some information about the Schoenstatt Shrine, as the main source of the graces which the image brings.

The persons who commit to care for the rotation and visits of an Auxiliary image are expected to know the meaning of this image, about the life and person of Deacon João Pozzobon, and about Schoenstatt and its founder.

The main coordinator of the particular state, diocese or region to which the Auxiliary image belongs has ultimate responsibility for the image, its rotation and preservation. The main area coordinator may organize the rotations in collaboration with a team or some individual. That is up to the coordinator.